16:1 When the Sabbath was past, Mary Magdalene, Mary the mother of James, and Salome bought spices, so that they might go and anoint him. 2 And very early on the first day of the week, when the sun had risen, they went to the tomb. 3 And they were saying to one another, “Who will roll away the stone for us from the entrance of the tomb?” 4 And looking up, they saw that the stone had been rolled back—it was very large. 5 And entering the tomb, they saw a young man sitting on the right side, dressed in a white robe, and they were alarmed. 6 And he said to them, “Do not be alarmed. You seek Jesus of Nazareth, who was crucified. He has risen; he is not here. See the place where they laid him. 7 But go, tell his disciples and Peter that he is going before you to Galilee. There you will see him, just as he told you.” 8 And they went out and fled from the tomb, for trembling and astonishment had seized them, and they said nothing to anyone, for they were afraid.

Whenever you get back from a trip you have to look through your pictures. We’ve finished our Lent journey and we’ve got some pictures in our album book here. 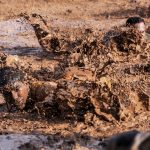 Remember our first day when Matt Dumke thought it would be fun to take a shortcut, so we left the path that God had marked out for us and ended up sinking in mud. All our clothes were filthy dirty for the entire trip until we got home and God washed them for us in Jesus blood. 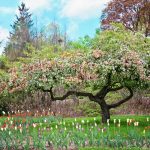 Then there was that time we found that beautiful garden and Shawn insisted that we try that fruit and if Shawn did it then of course Martin had to try and it made us all sick and of course there was no cure so that we all would have died except Jesus said he would do that for us. So we left Jesus there to die and ran off. 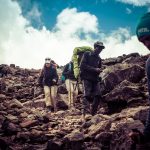 Or that time we wanted to climb up that mountain, but Lynn wasn’t supposed to because he just had heart surgery, so Lisa had to carry him. Lynn kept going on and on about what a nice climb it was. So we finally get to the top and finally got to meet God face to face, and he says, “Why did you climb up here?” I’ll come down anytime and meet you in Word and Sacrament.” 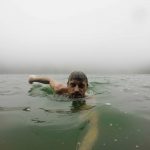 Here we are in front of the pyramids. Nancy wanted to go see the pyramids, except Bob offended the officials, so we were all thrown in prison but we escaped by swimming through the waters of baptism.

Mason and Caleb thought it would be fun to play with that snake they found in the tree, but it was a black mamba and it bite Lisa and she almost died, but then the other snake lifted up on the pole saved her because God promised it would.

It was a great trip but now we are at the end.

The Women Were Expecting Life As Normal: Death.

Now we come to the end, we’re back home and what do we find? Is it life as normal? Back to dull routine? Back to work on Monday?

Jesus had been a great and mighty prophet. He might have changed the world. But now He is dead, just like everyone else, time to bury Him properly, morn him for a bit and move on.

That’s life:  death, pain and suffering, you just have to sojourn on worrying about the little things, like how are we going to move that stone?

Who would have thought that sin would bring death? This is always the words of the sinner. It doesn’t matter what the sin is.

The teenager who looks at your in utter astonishment, “You are really going to ground me just because I was an hour past my curfew?”

The drug addict who thinks, “How did my life end up like this?”

It doesn’t matter how many times you warn people, the response is always the same,  “Sin has consequences!!!!!!!”

But our sin does bring death, pain and suffering, so that this is now our normal. This is the world we live in, this is what we expect and it is what the women expected as well, death.

That is what they were expecting, a dead body, life as normal. What they found was an empty cave.

Some people get excited over the silliest things, especially on a trip, the world’s biggest ball of spring, a rock in the house, etc.

It’s just a cave, right; it’s not even one of those cool caves with unending paths that you can explore. It’s just a shallow little cave, you can go in, but you can’t go out. What is so special?

Except its empty. Where did the body go? The door was sealed tight with Roman guards.

The angels tell us the most amazing thing we have ever heard. “He is not here, because he is arisen.”

That one fact changes everything, our end is not a hole in the ground, our end is life with God forever.

We are not traveling to the grave, we are traveling home.

It’s not a way out that we can find on our own. But with Jesus we walk right though the wall of death and into our home.

The Women Ended Up Home: With Jesus

What did the angel tell the women : “He is going ahead of you to Galilee.”  Not only is Jesus risen but you can go and be with Him. For the women that means temporarily in Galilee but after that eternally in heaven, as it means for us.

The grave is not our end there is a way through that dark bitter tomb. And Jesus has gone ahead of us and is waiting.

Someday we will go with Him and also be home. Then we will do all the things that people do when they get home from a trip. We wash our clothes in the blood of the lamb. We will finally get to rest from all our weary travel. We will embrace family and friends that we haven’t seen in years. We will sit down to feast.

And Jesus himself meets us, embraces us, and says, “Welcome Home, enjoy the feast that was prepared for you before the foundations of the world.”